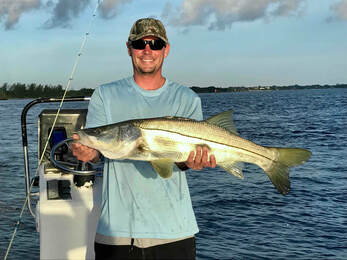 ​Our main focus for most trips is in fishing for monster snook and tarpon. Why? Because these two fish are the most explosive and powerful inshore game fish in the world! First let’s take a look at size – Stuart’s inshore waters hold a lot of bait fish and this allows our fish to get really big really fast; it’s not uncommon to catch snook in the 25-pound range and tarpon well over 100 pounds during the summer months. Not only do these fish go big on the scale but they also fight hard so when you get hooked into one of these bruisers you had better be hanging on tight not to get yanked over…oh and by the way both snook and tarpon are jumpers! So, lets recap – snook and tarpon get really big, fight hard, jump out of the water and if it couldn’t get any better Captain Chris has em trained to take a fly too!!! There are many ways to fish for both snook and tarpon ranging from fishing the beach and inlets, flats fishing, working the mangroves to nighttime fishing around the docks and bridges. Just give captain Chris a call and he will custom tailor a trip to meet and hopefully exceed your expectations.
Fish that are commonly caught with Sweet Relief Charters

Though snook and tarpon are generally our specialty we do catch and even target other species throughout the Treasure Coast including: jack crevalle, redfish, speckled trout, mackerel, shark and inshore snappers. These are all hard fighting saltwater fish that are fun to catch on light tackle and can also provide a few fish for the dinner table.

Snook – AKA “linesiders”, snook are one of the greatest fighting sportfish of all time. Snook are primarily a warm water fish not able to survive in waters less than 60 degrees thus limiting their US range to the southern half of Florida. The Stuart area tends to hold some of the largest snook on the east coast due to the deep cuts of the St. Lucie River, close ocean access and plenty of baitfish moving through.

Tarpon – AKA “silver king” – the name kind of makes the statement and yes these are the king of inshore gamefish! Big and powerful!! Tarpon can be found throughout the gulf coast and up the east coast of the US as far north as Virginia during the summer months. Here in Stuart we have both resident and migratory tarpon to fish for with the summer months offer some of the best action of the year.

Jack Crevalle – Different species of jacks can be caught throughout the world and here in our area we catch Jack Crevalle. These fish can grow to over 30 pounds and with a broad body shape they fight like a freight train. Jacks are most popular for their fierce aggression while feeding and pack mentality; basically, when a school of jacks come through no baitfish (or flies) stand a chance.

Redfish – Probably the most sought-after saltwater gamefish in the US due to their table fare and also their wide range. Reds can be caught throughout the Texas gulf coast around the west side of Florida and back up the Eastern seaboard into the Chesapeake Bay. We have a great population of reds and catch them frequently while fishing for snook and tarpon.

Speckled Trout – Another widely popular inshore saltwater gamefish throughout the gulf coast and eastern US. Specks are regarded as excellent table fare and though they don’t get as big as the snook and tarpon they do put up a very nice fight on light tackle.

Mackerel – These fish are veracious feeders that move in large schools devouring any and everything in their paths! We don’t generally target Spanish mackerel but if we see a school churning the surface while running through the intercoastal waters it doesn’t hurt to make a few casts to bend up the rod.

Shark – With all of the bait, gamefish and close proximity to the ocean the Stuart fishery is going to hold a good number of sharks and big ones! If targeted we could catch a number of different shark species to include bull, lemon and blacktip. For the most part sharks don’t bother us while we are fishing for snook and tarpon but occasionally we do have a fish get eaten.

Mangrove Snapper – Well, when there is nothing else to catch you always have mangrove snapper, and it’s not a bad thing! These are very good eating fish that put up a good scrap on light tackle. Though we don’t often target snapper we do catch them while fishing for other species and just a word of advice – don’t try to grab them by the lips or you might find out how they got their names!!

These are just a few species that we catch throughout the backwaters of Stuart and the St. Lucie Inlet and though snook and tarpon are our number one target you just never know what you might catch when you drop a line in the saltwater!!! ​We are available for charters between June 1st and October 31st. To Book your next fishing adventure simply give us a call or shoot us an e-mail through our Contact Page!!